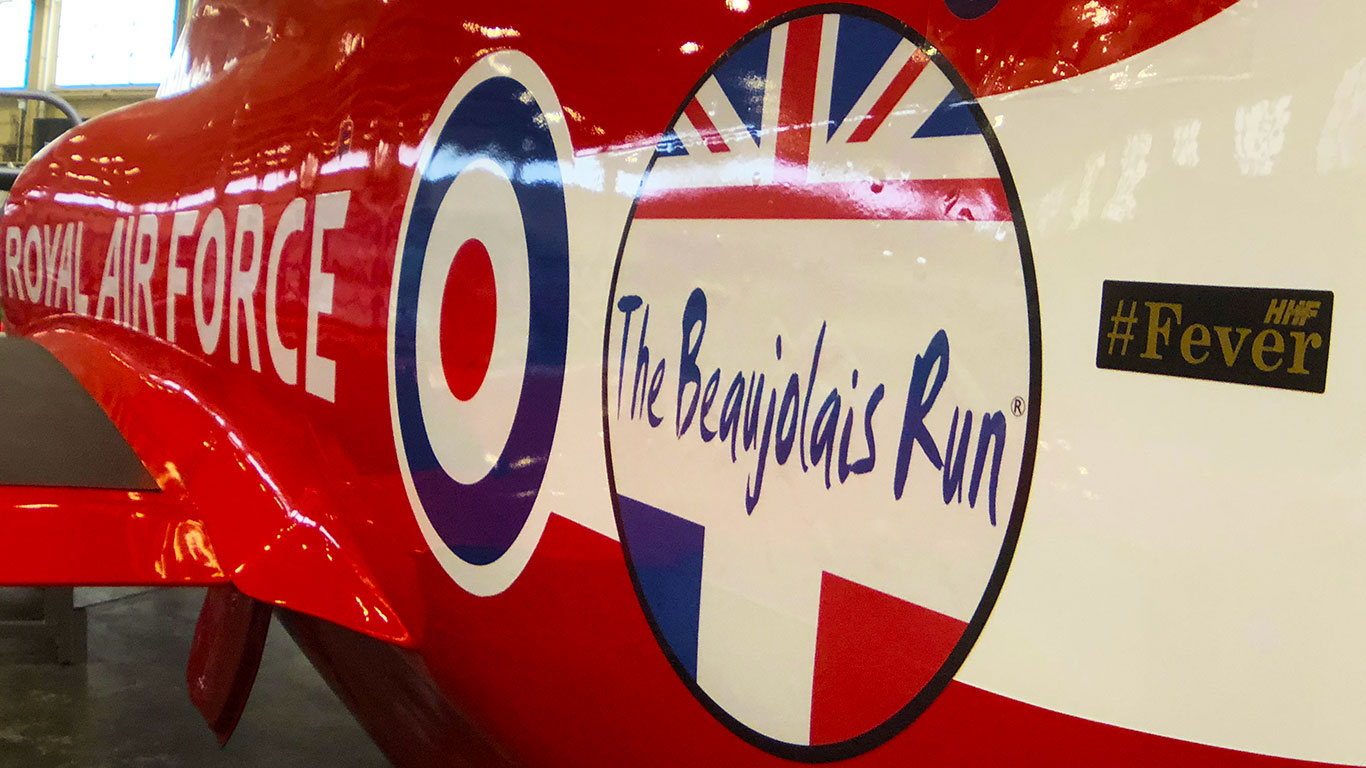 Wearing their specially produced William and Edwards crew wear, driver and navigator teams arrived excited at RAF Scampton to join the launch of The Beaujolais Run 2018®, and certainly left stunned. Sporting their 617 Squadron badges of the famous Dambusters Squadron under special permission gave an added air of expectation to proceedings.

Having passed through security they found themselves met by veterans of the Royal Air Force, who had agreed to guide them through the story of life as a member of 617 Squadron in 1943.

Passing Upkeep mines, as bounced against the dams, developed by Barnes Wallis and the grave of ‘Nigger’, Wing Commander Guy Gibsons Labrador’s grave, ‘Runners became immersed in all things ‘Dambuster’. Visiting Gibson’s office, with pipe and ash tray, still on desk, they learnt of his life and that of the crews involved in Operation Chastise. Also they heard how Gibson’s faithful hound had been run over, whilst the final briefing had been taking place; and he had decreed that he should be buried at midnight as he went in for the attack. They were enthralled to hear first hand the background to the original mission. The mission boards in Gibson’s office showed the original waves of planes, and each crew were able to pick out the plane that they and their vehicle represented.

It was ‘tea’ and a ‘wedge’, RAF style, awaiting on their return to the Lancaster’s original hangar. Mark Quinn Regional Director for the RAF Benevolent Fund greated, thanked and gave them insight to the work of the charity they were all supporting.

Crews also found they had further guests besuited in red and blue flying suits. None other than The Royal Air Force Aerobatic Team, the Red Arrows were waiting to join them. The 2017 ‘Run had started at Biggin Hill with Aston Martin ‘Red 10’ present and now they had ‘The Reds’ themselves amongst them.

Squadron Leader Adam Collins, the ‘real’ Red 10, had been selected by the Royal Air Force Aerobatic Team to launch the 2018 ‘Run. Present also, amongst ‘Runners and guests, were the Blues who each maintain and support a specific Red Arrow plane. The ‘Circus’ (as they are referred to) had been putting on a real show for ‘Runners by surreptitiously placing the Red Hawks on runway 22, to join the ‘Run. This was the first time RAF planes had taken part, since a Harrier brought back the first bottles from Beaujolais and put down in a coal yard in London to win the original competition.

On leaving through the very doors through which the Dambuster’s departed for their mission through, the ‘Runners steered for the bright lights of the ‘Runway in their vehicles to join Red 10, the Hawks and the Blues, on the threshold. With a deft wave of the Beaujolais Run start flag, Red 10 joined the likes of the late John Surtees CBE and Nigel Mansell OBE in letting loose the pack to enjoy the 1.7 miles of straight, manicured tarmac on their way Southbound like the leviathans of 1943. The Red Arrows had certainly made their presence known on the ‘Run in a way that only they can, and the ‘Run similarly on RAF Scampton. Heading South the thoughts of the 133 men that left RAF Scampton were clear in their minds as was their core